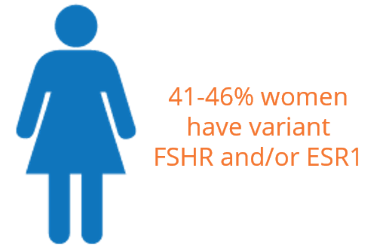 Follicle stimulating hormone (FSH) is responsible for the growth and recruitment of immature ovarian follicles in women. It acts by binding to the FSH receptor (FSHR) present on ovarian and uterine cells. A common variation of FSHR (2039A>G), prevalent in 41% of the population, binds poorly to FSH and results in reduced receptor function. This affects oogenesis in terms of reduced antral follicles, lower number of oocytes, longer stimulation period and lower maturing follicles translating into poor pregnancy outcome. Controlled Ovarian Stimulation (COS) in these women are significantly more successful with higher doses of FSH yielding higher antral follicle count and mature follicles, and improved oocyte quality and number of oocytes retrieved, resulting in better pregnancy outcome.

Estrogen plays a key role in folliculogenesis and embryo implantation by binding to estrogen receptors (ESR1 and ESR2). A variation in ESR1 (453-397T>C), found in 45% of women, affects estrogen receptor activity, and thus implantation outcome. Women with variant allele have lower number of follicles, mature oocytes, and good quality embryos resulting in poor COS outcome. Estrogen biosynthesis being regulated by FSH, exogenous FSH administration increases the hormone, thereby overcoming reduced ESR1 activity in these women. This may translate into improved COS outcome during IVF, ICSI and other oocyte retrieval procedures.

The test is suitable for all women undergoing or contemplating ART involving COS, such as IVF and ICSI. The test will genotype  women for FSHR (2039) and ESR1 (453-397) variations, classifying them into responder type for COS outcome. The report will indicate recommendations for altering FSH levels to improve COS outcome which can translate into an increased pregnancy rate in women with variation.