From 0 (Nil) to Millions of Sperms – Male Fertility Miracles!

From 0 (Nil) to Millions of Sperms – Male Fertility Miracles! 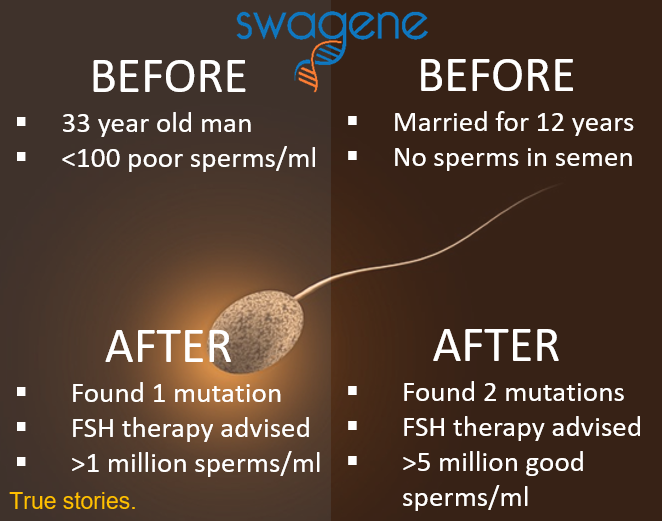 Find out the stories of two men below, 33 year old Vijay (true story, name changed) with hardly any sperms in his ejaculate, and 45 year old Shaan (true story, name changed) after 12 years of married life with no sperms or only occasional sperms seen sometimes in his ejaculate. We helped both these men not only produce millions of sperms, but also get their wives pregnant successfully!

Many infertile men don’t have sperms in their semen, or extremely low sperm concentration or sperms that are motile. This is a common cause of male infertility, called Azoospermia, and very severe oligozoospermia. Men without healthy sperms often undergo several unnecessary, expensive and invasive procedures such as varicocelectomy and testicular biopsies for sperm extraction from the testes with very little success. Many of these men can actually have a much easier and noninvasive Precision medicine routes to fertility and becoming a father.

While Vijay had fewer than 100 sperms/ml semen, Shaan had only occasional sperms in some samples. Both of them came to Swagene, and as recommended were tested for Y chromosome microdeletions. Both were negative, which means that they may be able to successfully father children.

They were then tested for the FSH Response Panel for Men. Vijay had one mutation in the FSH receptor, while Shaan had two mutations. We suggested that both of them will respond well to short-term FSH therapy. They were both given FSH therapy at the dose of 75 IU on alternate days for about three months.

Both of their wives are now pregnant and healthy, and they are very well on their ways to becoming joyous first-time fathers! Instead of low-success surgeries and biopsies, get your noninvasive Precision treatment for Male infertility now!