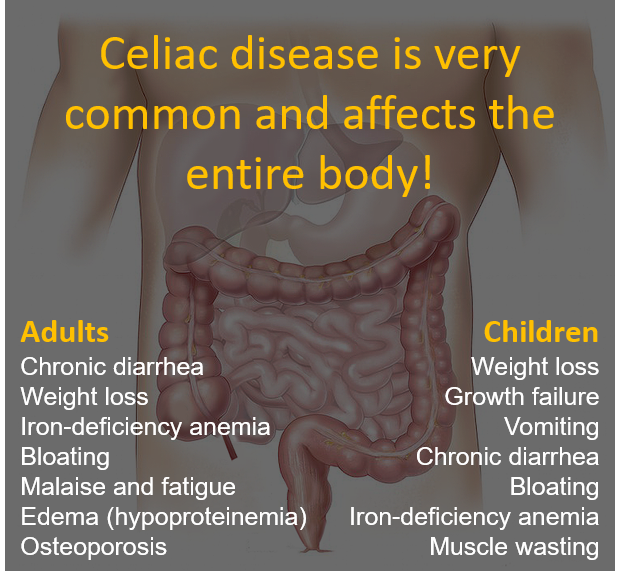 Celiac disease or gluten sensitivity is highly prevalent in the populations of South Asia and Middle East including Indians. The genetic markers for this condition, HLA-DQ2 and HLA-DQ8, are prevalent in roughly 30% of the population and is transmitted through genes to children. Testing these HLA markers is a confirmatory diagnostic test as other tests only detect the symptoms, and not the cause.

Celiac disease is a chronic condition that arises when the immune system fights against the protein, gluten, present in a large variety of foods, cereals and grains, and is ubiquitous in packaged foods. This leads to the immune system attacking the intestines and results in chronic malnutrition and thereby deficiency of several nutrients irrespective of the diet.

It is characterized by several symptoms making its clinical diagnosis difficult: diarrhea, weight loss, iron-deficiency anemia, bloating, fatigue, oedema, osteoporosis, growth failure, muscle wasting, irritability and unhappiness. In certain cases it even leads to peripheral neuropathy and deficiency-related conditions. A gluten-free diet is the only solution for people with the condition, and studies have shown that such a diet dramatically improves life even in asymptomatic people, i.e. people without any symptoms.

We recently tested a 54 year old woman who had lost 30 kg of her weight over a few years. She was suffering from type I diabetes, which ultimately resulted in kidney failure, and after dialysis she was given her husband’s kidney. In 5 years, her body rejected the transplanted kidney and she was back on dialysis. In the meanwhile she developed an acute infection that required removing her spleen (splenectomy), was suffering from severe muscle wasting and iron deficiency besides fatigue.

She was found to have high risk of celiac disease with the presence of two risk genes, and has recently started a gluten-free diet, which is expected to resolve many of her complications and restore her weight within a few months.

All diabetes type 1 patients are recommended to be tested for celiac disease by international Gastroenterology Guidelines. Further, people at high risk should also test their blood relatives for the risk genes.

To test yourself, just add the Celiac disease (Gluten sensitivity) panel to the cart and complete the checkout online right here. You’ll get the results within a week of us receiving the sample.