Medicine for Thrombosis and Stroke may cause the other extreme: Bleeding emergencies on Warfarin 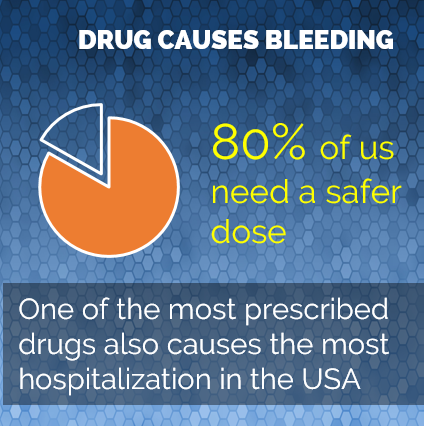 Warfarin or Coumadin is one of the most popular drugs in the world, and the leading cause of emergency hospitalizations in the USA. This is because it is safe within a very narrow range, and most people end up using unsafe doses. This test is for you:

The most common blood thinners used in medicine have to be given at the right dose for them to be safe. Instead, if you’re taking drugs that are 100-times more expensive, you may be wasting money unnecessarily. The report will predict your risks for emergencies related to internal bleeding when given this drug and advice your doctor on the safe dosage.

On the other hand, those of you that can take this medicine safely may be taking other more expensive drugs. This test will guide you on switching to the cheaper generic medicine and staying healthy both in body and bank account.

Is testing for all three alleles important?

Yes. While VKORC1 accounts for the majority of the drug action being its direct target, CYP2C9 is responsible for drug metabolism. The two variants of CYP2C9 account for >99% of the population genetic variation. Hence, testing all three alleles are important. 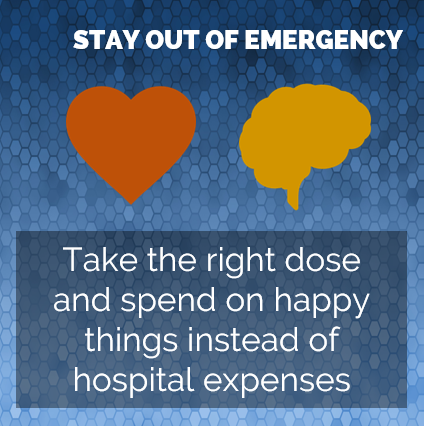 But there are more alleles on WarfarinDosing.org. What about them?

CYP450 genes have tens to hundreds of known variants (polymorphisms). In CYP2C9, *2 and *3 variations are known to affect warfarin metabolism and account for over 99% of population prevalence. The other variants are rare, and it would be very expensive to test for all known variants.

True. There are 7 known variations in the VKORC1 gene. They are all in linkage disequilibrium, which means that testing for any one is more than sufficient. Our report includes information on how to use WarfarinDosing.org using our test results.

The vast majority of people carry genetic mutations that lead to very fast metabolism of this class of medicines. This will lead to very high concentrations of the drug in blood. Instead of protecting the body by thinning the blood, these excess concentrations lead to internal bleeding frequently being so severe that patients end up in emergency rooms.