Men with infertility and where both partners are infertile will benefit from this test. It genotypes the patient for these two variations in FSHR and FSHB and classifies him for infertility treatment by FSH 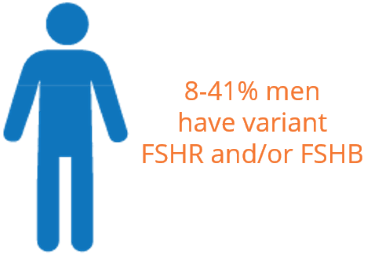 administration. The report will indicate recommendations for improving sperm parameters in men with variants, which may improve outcome of both natural reproduction as well as ART.

Follicle stimulating hormone (FSH) is important for male reproductive function and mediates its action by binding to the FSH receptor (FSHR) expressed on Sertoli cells. A common variation of FSHR (2039A>G), prevalent in 41% of the population, results in decreased receptor function. This affects spematogenesis by decreasing sperm count, motility and testes volume.

FSHB encodes the beta-subunit of FSH, which binds to FSHR and mediates hormonal action. A variation in the gene promoter (-211G>T), prevalent in 8% of population and markedly higher among infertile men, leads to decreased FSH expression and activity. This variation is similarly associated with decreased testicular volume, sperm concentration and motility.

‐doubling of sperm count was observed in

‐conversion to normozoospermia was observed in